As the Freedom Flotilla to West Papua continues its epic journey north towards Indonesian occupied West Papua, solidarity actions were held yesterday in both in West Papua and Melbourne.

Peaceful actions and prayers were held in Manokwari and Fak-Fak with participants carrying banners welcoming arrival of the Freedom Flotilla to their shores in September. Further actions are planned in undisclosed locations today.

Meanwhile in Melbourne the West Papuan Refugee Community coordinated an action held at the same time outside the Indonesian Consulate. 90 people attended to celebrate the Freedom Flotilla’s courageous and brave creative act of resistance, and protest Indonesia’s deployment of warships and jet fighters to meet the peaceful flotilla of three small yachts. 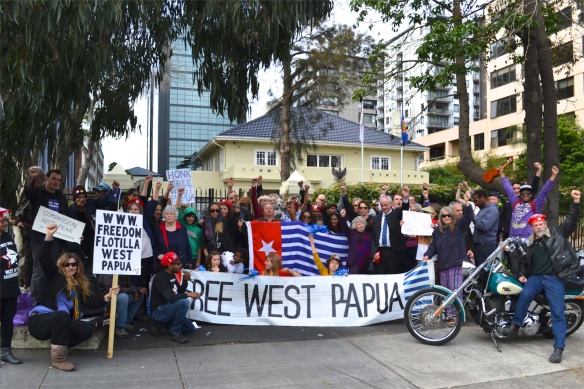 Impassioned cries of “Papua Merdeka” (Free West Papua) were made by the crowd, which included West Papuan refugees, Indigenous Elders, children and friends, musicians and supporters, many of whom have been rallying for justice in West Papua for decades.

Shirley Shackleton lent her inspiration to the crowd from her experiences in the long struggle for justice for her husbands murder and for the East Timorese, as well as sharing lessons on the role of the Lusitania Expresso in drawing attention to human rights abuses in Timor after the Santa Cruz massacre in 1991 and similarities between this voyage and the Freedom Flotilla to West Papua.

Victorian MP Greg Barber of the Greens and Senator John Madigan of the Democratic Labor Party reaffirmed their parties long standing commitment to addressing human rights abuses in West Papua and added their support to the growing number of politicians standing behind the Freedom Flotilla.

Gunnai Elder Robbie Thorpe spoke on the authority granted by the issuing of Original Nations passports. Natalie Pa’apa’a of Blue King Brown addressed the crowd in support of the Freedom Flotilla’s creative act of resistance.

Joe Toscano attended from Ballarat and spoke on the history of the grassroots movement for a Free West Papua in Australia.

A live satellite call was made to the Freedom Flotilla’s flagship, The Pog with Freedom Flotilla co-founder Jacob Rumbiak speaking above the high winds at the Flinders Island Group.

Further solidarity actions are being organized Den Hague tomorrow (29th August), in Port Moresby, PNG and in Brisbane for the 2nd of September, and Adelaide, Canberra and Sydney with dates to be confirmed.

In further news, the Freedom Flotilla has received reports yesterday that armed Indonesian naval vessels have already been deployed in a show of force along the West Papuan border with Papua New Guinea boats, despite the Freedom Flotilla’s three small yachts current position on the Queensland coast being publicly available information via their website.