On Saturday the 7th of September 2013, Australia will go to the polls to elect a new Prime Minister from one of two major parties. Both party’s policies treat seeking asylum as a crime, and will continue funding the Indonesian military making them complicit in violence in West Papua. 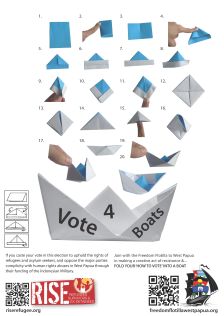 The Freedom Flotilla to West Papua, and Rise Refugee, Australia’s first refugee and asylum seeker run aid and advocacy organisation, are calling on all people who caste their vote for the rights of refugees and West Papuans to join with them in a creative act of resistance by folding their how-to-vote cards into boats at polling booths around the country.

Ronny Kareni, Flotilla organiser who grew up in Papua New Guinea as a refugee from West Papua, told Rise Refugee about the situation of the existing refugees in PNG, before Kevin Rudds plan to banish boat-arrivals there in Manus Island Detention Centre. “12,000 West Papuan refugees who have settled in PNG since the 1980′s are still being treated as a second-class citizen and border-crossers. Most Papuan refugees have not been recognised by PNG authorities as permanent residents or citizens but instead some have been given ‘permissive resident’ status, even though they are born in PNG. Furthermore, many Papuan refugees in Port Moresby live in limbo with resettlement issues even today.

He spoke of Australian Governments colonial history in Papua New Guinea, and their role in the illegal takeover of West Papua by Indonesia in 1969. “Though refugees coming from Australia being placed in extended detention on Manus Island is a shocking new development, the precedent of this detention centre goes back to 1969 when Australian colonial authorities detained two West Papuan leaders, Clement Ronawery and Willem Zonggonau. At the time they were about to board a plane in Port Moresby to New York and alert the world about the outcome of the sham ‘referendum’ that took place in 1969 in West Papua. Instead they were arrested (by Australian colonial authorities) and detained on Manus Island, preventing their story from reaching the outside world.”

Amos Wainggai, who’s arrival in Cape York in 2006 as one of the 43 West Papuan asylum seekers sparked a diplomatic row with Indonesia, spoke of how the two issues are tied together by more than boats. “We West Papuans came to Australia fleeing from persecution, that is why we came here across the Torres Strait in a traditional canoe. Now I am returning to West Papua with the Freedom Flotilla to struggle for justice in my homeland.”

Undeterred by statements from both major parties that the Australian Government would not intervene to stop violence being carried out against them by the Indonesian military, the Freedom Flotilla will continue its journey to West Papua across the Torres Strait, departing Thursday Island early next week.

Ronny Kareni said “creative resistance is a weapon of choice that can rise above tyranny”, and that the messages of support received by the Freedom Flotilla “continue to give hope for West Papuans and refugees to achieve freedom and justice.”

3 thoughts on “‘Vote 4 Boats’: Calls to Join the Freedom Flotilla and Rise Refugee in an Act of Creative Resistance”