Six of the West Papuans who sought asylum in Australia after being persecuted for their involvement in a ceremonial handover of sacred water and ashes as part of the Freedom Flotilla, were relocated under armed guard to Kiunga on Saturday the 12th and will be sent to a refugee camp in East Awin on Tuesday the 15th of October 2013.

The border refugee camp is home to thousands of West Papuan refugees who have fled from violence and persecution to PNG. Since 1986 the PNG government has practised a policy of relocating refugees to the remote camps, where their freedom of movement is restricted and their best hope is to one day gain a ‘permissive residency permit’ to allow them to live outside the camps. 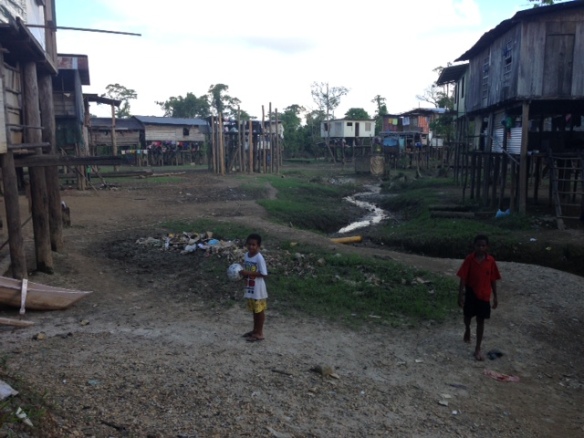 Ruben Blake, spokesperson for the Freedom Flotilla said, “It is disturbing that Australia would be complicit in a policy of dumping refugees in a remote border region and leave them to fend for themselves. Australian mining company BHP Billiton dumped its tailings from the Ok Tedi Mine into the river, and now Australia is dumping its refugees in the affected area.”

A West Papuan who grew up in East Awin after his family was relocated there by the PNG government, expressed grave concern for the group.

“Living in East Awin was really a challenge, life there is very hard. The nearest town Kiunga is 50km away from the refugee camp. During rainy season cars cannot operate so the only way to get to the town is walking for 50km to the town. Thousands of West Papuan Refugees have died of malaria in East Awin Camp.”

He continued “We were denied to the right for citizenship, we were also discriminated by Papua New Guinea Government in terms of getting better education, health services and job opportunities. Many more have been displaced following raids from Papua New Guinea Police Forces (Task Force).  Houses are burnt down, West Papuans are arrested and tortured by the Task Force simply for using the land to build houses and grow crops. Discrimination and persecution are still happening until today, so it is feared that the West Papuan asylum seekers that were sent to Papua New Guinea will face the same thing faced by the thousands of past West Papuans Refugees who have been relocated there.”

Ruben Blake said “We know that the deportation of refugees from Australia and now to East Awin is illegal, both under the Refugee Convention, and under the terms of the 2003 MoU with PNG. Even the Immigration Minister who cited the MoU as basis for their deportation has admitted that. Unfortunately Australia’s Border Protection policies are cynically designed to prevent asylum seekers gaining access to legal representation, but we are continuing to look for legal avenues to challenge their cruel, inhumane and illegal action.”

The asylum seekers in Kiunga on Sunday 13/10