Mural underway on the corner of Bennett Street and Cavanagh Street Darwin. In support of Australians for a Free West Papua.

Amazing mural going up at this moment on the corner of Bennett Street and Cavanagh Street. In support of Australians for a Free West Papua.

The mural, featuring the Aboriginal and West Papuan Morning Star flag was painted by over 20 local artists and will be completed with a signing off by visiting West Papuan Independence leader Jacob Rumbiak this morning at 11am at its city central site on the corner of Bennett and Cavanagh Streets.

The raising of the Morning Star flag is a crime in West Papua under the brutal Indonesian military occupation, punishable by 15 years. It now hangs here in the centre of Darwin city protected by the Larrakia people and the wider community to remind all Australians of our obligations to work alongside  our near neighbours in their struggle for human rights and freedom.

Photo and interview opportunities at 11am at the site of the mural. 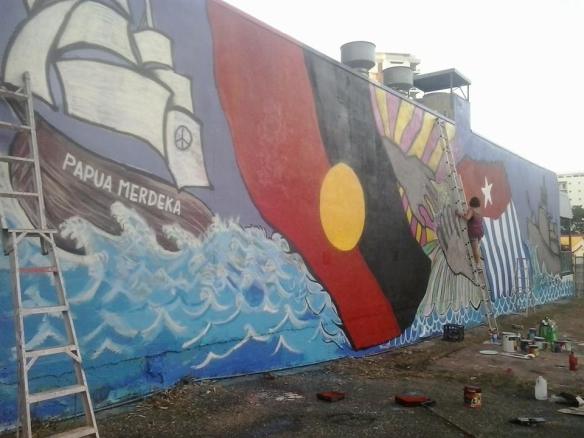 In support of Australians for a Free West Papua.