Donald Rumsfeld and Dick Cheney knew about the massive gold deposits that is now Grasberg Freeport mine before the Dutch pulled out and conspired with Indonesia to take control of West Papua to gain access to its resources.

The Freeport project is associated with an astonishing level of violence. Confrontations and military conflict have flared repeatedly since the Dutch departed, with the Indonesian government well supported by the US government with military training, advisers and weapons sales. The Australian government also provided military hardware, including helicopters, and training. There have been multiple instances of military deployment of modern warfare techniques against local indigenous traditional cultures with peaks occurring in 1977, 1980 and 1996. 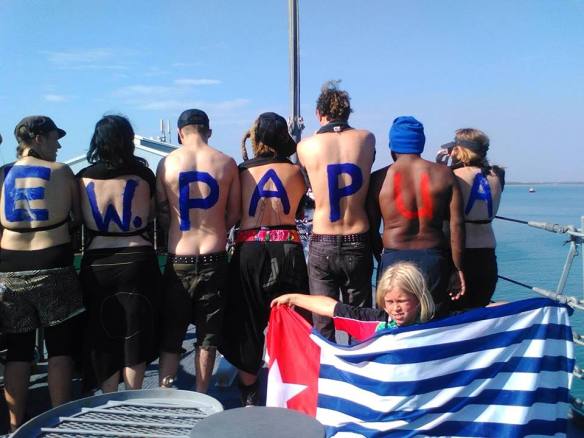 The U.S. betrayed West Papua in 1961 by facilitating Indonesia’s invasion of West Papua. Time for the U.S. to right the wrongs of the past and help West Papua on the road to freedom.

2 thoughts on “Shirts off for Papua on U.S. War Ship”