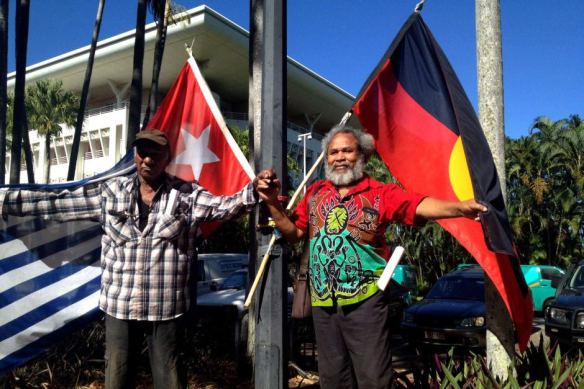 The world’s only West Papuan embassy was established yesterday on the lawns of the northern territory parliament, this morning it still stands, but it is under threat of eviction.

The embassy is making history, with West Papuan, Larrakia and Arabunna Elders and non-indigneous activists gathering on the grounds outside parliament drawing attention to the ongoing genocide in West Papua by the Indonesian occupiers.

“We’re refusing to leave until a parliamentary representative speaks with us and commits to a plan of action for West Papuan Independence.”said spokesperson Izzy brown

With a traditional Honai hut erected, a welcome by Larrakia elder June Mills, and the morning star flag flying, the embassy stands as a space where West Papuan culture is celebrated.

“This falls on the anniversary of the Biak Massacre but the killing is ongoing. The Biak Massacre started by a flag raising, by people celebrating their Papuan identity with the morning star flag. Men. Women and children were slaughtered, put up as an example to any one that raises a flag of self-determination.” Said Larrakia Elder June Mills

“We are supporting the United Liberation Movement of West Papua. People in Papua are united in their struggle for independence” Jacob Rumbiak, West Papuan Foreign Affairs Minister

“The time has come for us to make world peace, West Papuans have the right to live in freedom” said Arabunna elder Kevin Buzzacott

The embassy has resulted from a 3 day forum on the West Papuan struggle in Darwin, which was attended by West Papuan, Larrakia, and Arabunna elders, and representatives as well as non-indigenous supporters, including crew members from the West Papuan Freedom Flotilla.

The Freedom Flotilla is set to sail again to draw attention to the destruction and genocide perpetrated by multinational corporations and colonial governments against the West Papuan people, we are targeting share-holder Rio Tinto over the Freeport Grasberg mine.