Today The Freedom Flotilla West Papua has chosen to respond to the joint US and Australian ‘war games’ with a direct action on the high seas, drawing attention to the West Papuan struggle for independence against the cruel Indonesian occupation.

The Flotilla are focusing on the US and Australia’s engagement in enabling and supporting this occupation, which dates back to the flawed 1961 U.N. facilitated takeover of West Papua. Both US and Australian ongoing financial and Military support has continued to the present day as have the subsequent widely reported killings and human rights violations in West Papua by Indoensian forces. 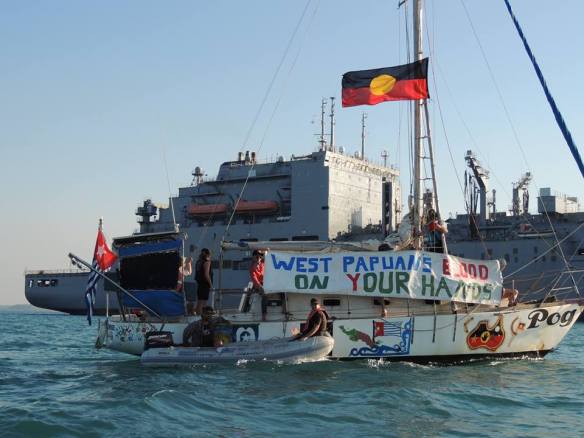 West Papua has been under Indonesian military occupation since the 1969 vote when Indonesia handpicked 1025 West Papuans who were forced to vote at Indonesian gunpoint. Since, West Papua has suffered a widely reported genocide with now over 500,000 Papuan citizens killed, raped and tortured. Flotilla initiator, Arabunna Elder Kevin Buzzacott, says that “We can no longer have this murder on our doorstep”

”Australia and the U.S. are complicit in the genocide happening in West Papua. The blood of West Papua is on your hands” Izzy Brown – Freedom Flotilla West Papua 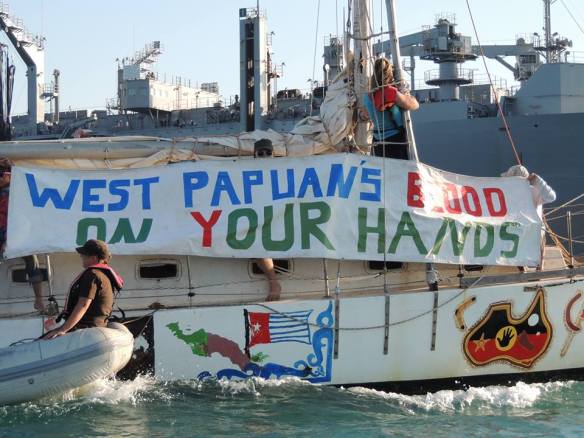 The Australian government reduced foreign aid to Indonesia this year but funding, including Indonesian police training and assistance have remained to secure fragile relations between the nations. Indonesian forces are guilty of gross human rights violations and Australia has to stop funding and feeding the fear and brutal killings. West Papuan people are struggling for freedom. Many Papuans are struggling for their lives. They have asked for our help. We helped the Timorese in their time of need. The people of West Papua also deserve our support. Contact Freedom Flotilla to West Papua freedomflotillamedia@gmail.com Cindy Watson Australians for a Free West Papua 0407267502